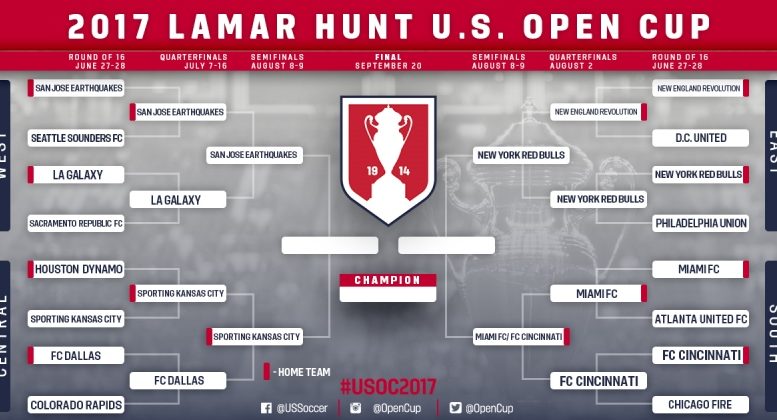 The postponed 2017 Lamar Hunt U.S. Open Cup Quarterfinal game between Miami FC and FC Cincinnati has been rescheduled for Wednesday, Aug. 2. Miami FC will host the match, which is set to kick-off at 7:30 p.m. ET, at Riccardo Silva Stadium on the campus of Florida International University in Miami.

The game was originally scheduled to be played at the same stadium on July 12 but was postponed due to dangerous weather in South Florida.

The winner of the Miami FC-FC Cincinnati Quarterfinal will host the New York Red Bulls on Aug. 9 in the Open Cup East Semifinal. Miami FC from the North American Soccer League (NASL) and FC Cincinnati of the United Soccer League (USL) are the last two remaining Division II sides in the competition. No side from below Major League Soccer (MLS) has reached an Open Cup Semifinal since Richmond Kickers in 2011.

The three other 2017 U.S. Open Cup Quarterfinals have been played with the San Jose Earthquakes beating the LA Galaxy 3-2 on July 10 and Sporting Kansas City knocking out defending champions FC Dallas 3-0 (AET) on July 11. The New York Red Bulls defeated the New England Revolution 1-0 at Jordan Field on the campus of Harvard University on July 13.

The West Semifinal between Kansas City and San Jose is scheduled for Aug. 9 at 7:30 p.m. CT and will be played at Children’s Mercy Park in Kansas City, Kan. The 2017 Lamar Hunt U.S. Open Cup is the 104th installment of the competition, the third-longest consecutively running cup competition in the world and the oldest cup competition in the United States. The winner qualifies directly for the 2019 CONCACAF Champions League, where a chance to reach the FIFA Club World Cup is on offer.