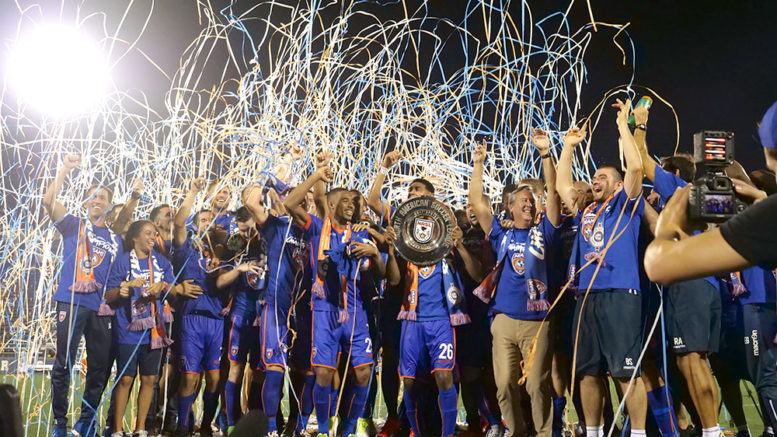 The Miami FC clinched the NASL Spring Season Championship on Saturday night after beating the San Francisco Deltas 7-0 and setting a goals scored record for the franchise. The Orange and Blue got four goals from Stéfano Pinho, a brace from Dylan Mares and an Ariel Martínez wonder-goal.

One year after finishing last in the NASL Spring Season standings of 2016, the Orange and Blue culminated a phenomenal turnaround in the first half of 2017.

Sporting the league’s best offense and defense, as well as the best goal differential, the Miami FC dominated its opponents throughout April, May and June. They scored 30 goals and gave up just 10 while winning 10 matches, drawing three and losing just twice. Miami’s home (5-2-1) and away records (5-1-1) were both stellar, and they were unfazed wherever they played.

The Miami FC still has one league match remaining in the Spring Season, a road matchup against the Deltas in San Francisco.

The Miami FC is also still competing in the U.S. Open Cup, with a massive quarterfinals match against FC Cincinnati from the USL looming on Wednesday, July 12 at Riccardo Silva Stadium at 7:30 PM. Tickets start at just $15 for adults and $10 for children 12 and under, and are available at MiamiFC.com/tickets. For group tickets, call 844-MIAMIFC.