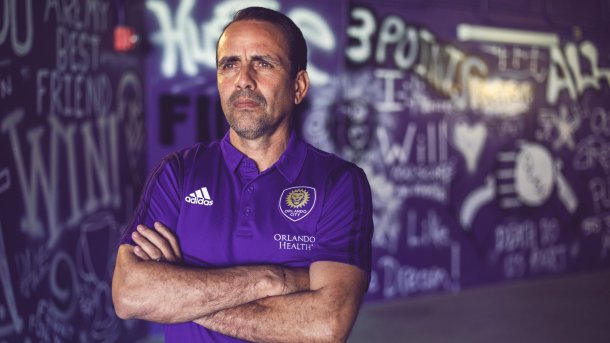 OrlandoCitySC.com- Oscar Pareja prefers to look at all things – soccer, driving to work, life – with the glass half full. Asked at the club’s Media Day press conference what he’d say to hopeful supporters in 2020, Orlando City’s head coach posed another question. “Do you expect your day to be good, or do you expect your day to be rotten?” “Many people just choose the other one,” he said. “‘Ah, here we go again, it’s traffic, so it’s a bad day. It’s gray, what a bad day.’ And I like gray sometimes! And sometimes when it’s so sunny, and people say ‘oh it’s too hot, it’s wrong, it’s a bad day.’ And I like when the sun comes up!” It’s early days, but the sun seems to be shining on Orlando City so far in 2020. The Lions have won each of their four preseason games, including a 1-0 win in their first runout in front of fans last Saturday night against Montreal. Returning faces like Portuguese superstar Nani and newcomers such as Homegrown Jordan Bender and Brazilian midfielder Junior Urso have found their way onto preseason scoresheets. Orlando City Executive Vice President of Soccer Operations Luiz Muzzi, who arrived in Orlando last winter before bringing Pareja aboard in December, is feeling the rays of hope as well. Pareja has put an emphasis on overloading the players with intense workouts thus far in preseason, which Muzzi agrees is key for building a strong base. “We did three-a-days in Mexico,” Muzzi explained. “You see guys doing seven o’clock [sessions], doing lunchtime workouts on the beach, and then doing five o’clock training sessions. All the guys had very good energy, a great vibe, everybody’s working hard, so we’re very excited for the season. We think we have great things ahead, and we can’t wait to start playing real matches.” Pareja also discussed some details of his vision for the club’s on-field identity. The Colombian’s FC Dallas teams were noted for their masterful organization, and not one of Pareja’s five Dallas squads finished outside the top 10 in MLS in fewest goals allowed. “I know about this game, if you are organized, and if you are strong defending, you have a great option to win the game,” he said. “We would like to be protagonists of the game, and we would like to keep [the ball] too, because our teams would like to have possession with purpose and be offensive, take chances and score goals. But sometimes being so romantic with the game, it just allows you to forget that you need to organize and defend. And that balance of those two phases, we are working hard to make it good both ways.” The team has also made strides off the field. Muzzi noted the strong chemistry of the group, helped tremendously by the team’s week-plus trip to Cancun. “The new guys are gelling with each other, and they’re also getting along with the guys who were here before,” he said. “Overall, you look at the group, and you see a bunch of guys who are working hard, not complaining, and they were exposed to a lot of hard work. And you see the guys are happy. They get to dinner at eight o’clock at night in Mexico after having three sessions, and they’re still singing, they’re still making jokes…everyone is getting along well, and hopefully that can translate on the field.” Hope does seem to be the general feeling around Orlando City going into the season. The games are not far away now. And as Pareja says, it’s all a matter of perspective. “Players, owners, administrators, directors, coaches, we are compromised to make things different, and to [use] all our efforts to change the story of the club,” Pareja finished. “But it’s a game. It’s a game. I choose already every morning just to think that everything comes right.