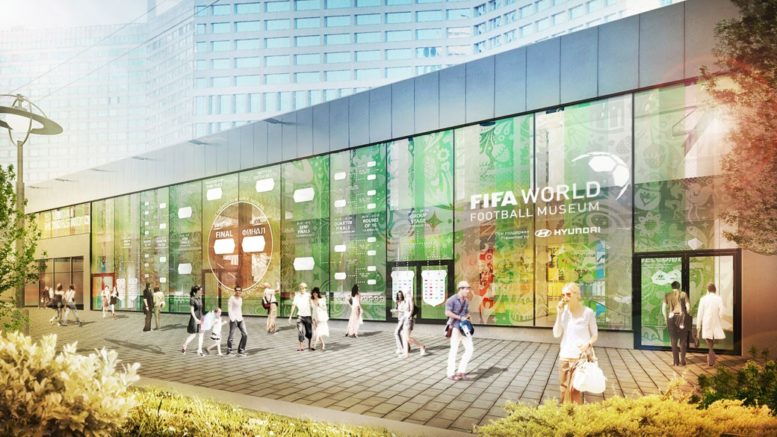 For the duration of the 2018 FIFA World Cup Russia™, the Hyundai Motorstudio on New Arbat Avenue in Moscow will host a major exhibition staged by the FIFA World Football Museum. Presented by FIFA Partner Hyundai, The History Makers will open on 9 June, five days before the tournament kicks off, and will run until 20 July, five days after the Final. Entry is free into the exhibition each day from 10:00 to 20:00.

The facade of the Hyundai Motorstudio Moscow will be transformed into a giant 2018 FIFA World Cup™ scoreboard, allowing fans in the street to follow the progress of the tournament. Once inside, visitors can learn more about the history of the tournament and the different fan cultures that make the event so unique. Central to the whole experience is a giant circular LED screen, showing highlights and memorable moments from past finals and some of the greatest players to have featured in them.

“Football fans from all around the world can look forward to visiting a lot of attractions in Moscow during the 2018 FIFA World Cup. They will be able to experience the finals not only in the stadiums, but also at the FIFA Fan Fests, in Red Square – and now thanks to this collaboration with Hyundai, even at the FIFA World Football Museum. This unique exhibition will showcase the history of the FIFA World Cup with many fascinating objects to celebrate the heritage of football,” said FIFA Secretary General, Fatma Samoura.

“In collaboration with the FIFA World Football Museum we are delighted to open this special exhibition for the first time in the Hyundai Motorstudio Moscow, in the heart of Russia during the 2018 FIFA World Cup Russia,” added Wonhong Cho, Chief Marketing Officer of Hyundai Motor. “As the FIFA World Cup’s Official Automotive Partner, we are committed to supporting and furthering the development of world football by providing fans with unique and enjoyable experiences like this, in the same way we are committed to caring for our customers by ensuring special and rewarding Hyundai ownership experiences the world over.”

The exhibition’s ground floor is a tribute to the passion and devotion of fans from all over the world and their role in making the FIFA World Cup™ such a compelling spectacle. There visitors will see messages from fans of all 32 competing nations and a special display for the adidas Telstar Official Match Balls of the 2018 FIFA World Cup™ used for the kick-off of the 64 games played in Russia. After each match, the ball which started the game will be added to the growing collection at the exhibition.

The upper floor is devoted to the history of the FIFA World Cup™. Each of the 20 tournaments played so far has a showcase featuring unique objects and stories from legends like Lev Yashin, Pelé, Diego Maradona and many more. And set among the showcases, there are short films that tell the story of every FIFA World Cup™ Final.