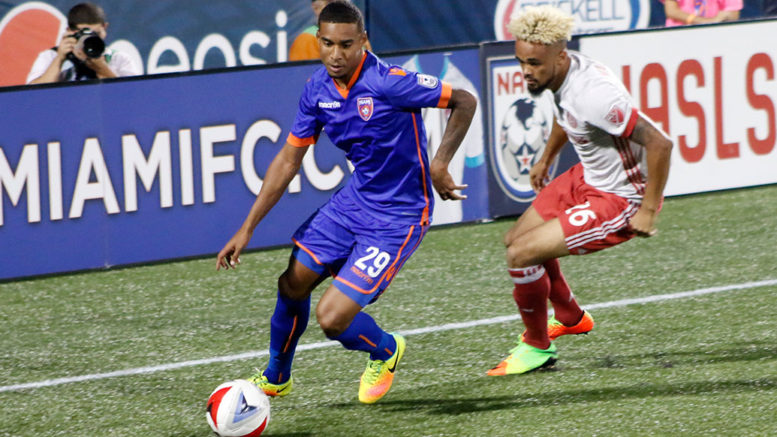 How They Got Here
The Miami FC’s road to the quarterfinals has been a smooth ride for the most part. The Orange and Blue has beaten the South Florida Surf, the Tampa Bay Rowdies, Orlando City SC and Atlanta United FC.

Despite needing a last-second goal from Poku to discard Atlanta United, Miami has accumulated a +6 goal differential through four U.S. Open Cup matches and has finished all of their matches in regulation time.

Their first three matches all ended 1-0, but their win over Chicago was a tense, nail-biting affair with a stunning finish. With the score 0-0 after 120 minutes, the teams were sprung into a penalty shootout.

With the quarterfinals on the line, FC Cincinnati goalkeeper Mitch Hildebrandt saved three Chiacgo penalties and catapulted his team into the next round.

Night Full of Milestones
Miami FC’s 7-0 win over the San Francisco Deltas on Saturday night was packed with historical implications.

The seven goals scored marked a Miami FC record, as the previous record of four goals had been tied in the first half. Miami then shattered the record in the second half of a world class performance.

Stéfano Pinho scored four goals in the match, a personal-best for the Brazilian and a franchise-high for a single player in one match for Miami.

Instinctive Passing
Miami sports the top offense in the NASL with 30 goals scored. The club’s offensive prowess can be attributed to its stellar passing.

Miami FC players occupy four of the top 10 spots for total passes in the NASL, including three in the top five. Defenders Mason Trafford and Hunter Freeman rank first and second in the NASL with 959 and 942 passes, respectively. Richie Ryan is fifth with 851 and Michael Lahoud is eighth with 739.

The Miami FC midfielders Dylan Mares and Kwadwo Poku have been at the forefront of this offensive explosion. The dynamic midfielders have each created 29 scoring chances, tied for the most in the NASL, for the Orange and Blue.

Forward Vincenzo Rennella has also done well to not only score but also create for others. He currently leads the league with five assists to go along with 22 chances created.

Stéfano Pinho simply can’t be contained by any opposing defense.

As if a hat-trick against Orlando City SC in mid-June wasn’t enough, Pinho one-upped himself on Saturday night by netting a personal-best and Miami FC record four goals against the San Francisco Deltas.

Pinho has now scored a preposterous 10 goals in his last six matches, putting the ball into the back of the net whenever he receives a touch inside the box.

Dylan Mares provides an indispensable presence in midfield for the Orange and Blue.

His consistent attacking prowess coupled with a high workrate when tracking back on defense allows Miami to transition from marking to attacking in an instant.

Mares found his goal-scoring form on Saturday night after a five-match drought, scoring twice against the Deltas and providing an assist.

Mares is tied for fourth in the NASL with five goals scored, third with three assists and first in chances created with 29.

Looking Ahead
The Miami FC will head to San Francisco to take on the Deltas in the NASL Spring Season finale. The Orange and Blue will look to finish their championship campaign with three points before a two-week hiatus.